Analysis of the quotations of Sacha Guitry and Pierre Desproges

Here are the results with our comments. 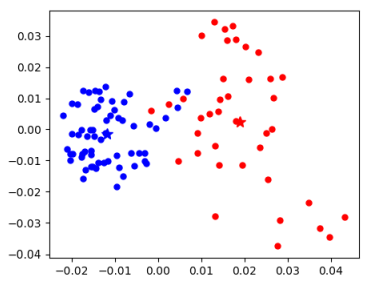 For each author, the quotations were concatenated (18304 and 11645 characters including spaces for Guitry and Desproges in blue and red dots respectively) to be analyzed with a resolution of 300 characters (cut into fragments of 900 accented characters approximately, resampled three times), comparing the use of pairs of characters by multivariate analysis over distances chi-squared, thus reducing the number of resulting dimensions to 38. For questions of readability, the results obtained for the 1st and the 3rd dimension are represented on this graph on the abscissa and ordinate axes respectively. For each cloud of points, a centroid (colorful star) has been calculated.

The two-dimensional representation of the multivariate statistical analysis shows that the blue dots form a homogeneous cloud, distinct from the homogeneous cloud of red dots. I.e. the style of the quotations of Sacha Guitry is substantially different from that of Pierre Desproges. The homogeneity of the two blue and red clouds reveals that each author uses in these quotations a style of his own.

In conclusion: each of the two authors whose citations are compared in this multivariate analysis uses a constant style in all his quotations, distinct from the style of the other writer. We shall point out however that the style used by Sacha Guitry seems much more constrained than that of Pierre Desproges.

According to this analysis, each of the quotations was written by one person – certainly the signatory – in accordance with good editorial practices: without the help of a third party.