QAnon has spread conspiracy theories to an unprecedentedly large audience. Its thousands of online messages have popularized narratives such as the existence of a child-trafficking deep state. Recently, it inspired a series of violent attacks and was listed as a terrorist threat by the FBI. The Swiss company OrphAnalytics just published an analysis of all messages posted by Q. Its patented technology aims at identifying authors of written documents. It has found two individual signals within the corpus of Q messages. This investigation contributes to revealing the origins and the persons behind one of the most impactful conspiracy theories in recent times.

A former geneticist trained at Harvard and the University of Lausanne, Roten has derived his text analysis approach from computational genomics. While conventional stylometry relies on the interpretation of words, content, or syntax, OrphAnalytics technology is entirely based on algorithmic analyses. It compares frequencies of character patterns to bring out individual signatures, regardless of the text meaning. Experts at the company have provided compelling pieces of evidence in several legal affairs in Europe and are collaborating with the School of Criminal Justice at the University of Lausanne.

OrphAnalytics analysts have skimmed through the entire corpus of Q posts known as “Q drops”. They cleaned the 4952 messages from any content deprived of individual syntax: lists, greetings, quotes from personalities, and messages shorter than 50 characters. Then, they fed the resulting elements to their software. 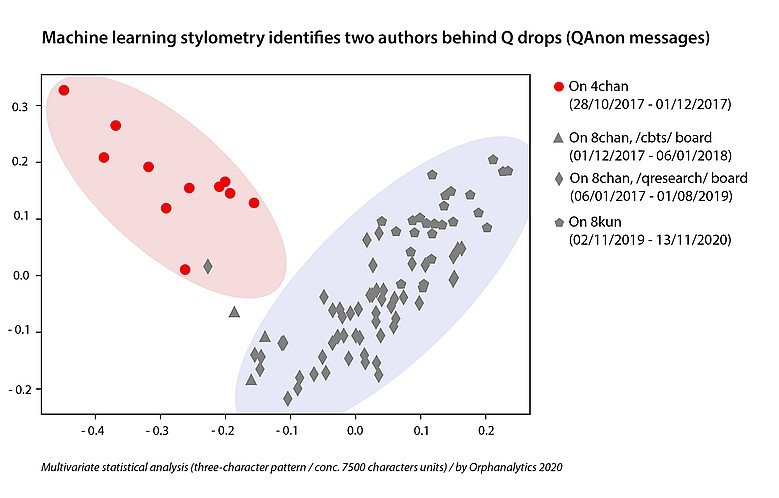 The analysis shows that the first period of Q messages clearly bears a distinct individual signature from the rest. These seminal messages appear on the 4chan web forum, from October 28th to December 1st, 2017. After that, another author takes over QAnon on another forum, named 8chan. The signal difference is strong enough to leave very little doubt on this author’s swap.

The second and longest period — from Dec.1 2017 to Nov. 13, 2020 — shows a single signature with a slight evolution over time. While it is not impossible that a few other persons have mixed their voices in these +4700 messages, the signal is overall very consistent and points to a single author, says Roten.

“The next step is to contribute putting a name on QAnon by comparing these signatures to those of the usual suspects,” says Roten. “To do that, we gather and cure written material from these persons to compare it with Q messages.” Recent investigations point to a handful of potential authors behind Q messages, most notably the owner of 8chan forum Jim Watkins. “Tracing back the history of QAnon is important. It could help to understand how and why a baseless and outlandish theory, initially destined to a few isolated hackers, ended up having such a broad social and political impact.”

Founded in 2014 in Switzerland, OrphAnalytics develops disruptive stylometric technology to identify text authors. It provides expertise in literature study, ghostwriting detection, and legal affairs. Its patented machine learning approach derives from genomics analysis techniques. OrphAnalytics is collaborating with the School of Criminal Justice at the University of Lausanne.